the hottest musicians around.  Last year, I was lucky enough to discover the rare talents of FiFi Rong.  Bowled over by her invention and way of working:  This year will see her create more music and unveil a brand-new E.P.  In a music scene that has too much staleness and rigidity:  Artists like FiFi Rong are a commodity that needs to be promoted and savoured.  Keen to catch up with her- and reflect on the year just past- I asked her about music plans and her heritage; who inspires her sounds- and what music means to her…

Hi Fifi.  I hope you are well.  How was your Christmas and New Year?

It was great thanks!  It was restful and I just did what I love doing the most throughout the holidays

I believe you a planning a PledgeMusic campaign for your next E.P.  What can you tell us about that?

Yes, I’m running PledgeMusic campaign again for my new E.P. Forbidden Desire as I really loved the interactive experience of the campaign for my last E.P.  The process of making music is the part I enjoy the most and sharing it with people (who like my music) is the best experience ever.  This time, I’m running the campaign for one month only.  I’m adding in some additional exclusive one-off items whilst making some of the items from the last campaign available again- for those who missed it last time and for those who are new to me 🙂

In terms of your style and image; it is very unique.  Was there any particular person that inspired that image, or was it always a personal choice?

My thinking was to introduce some eastern culture in a western, modernised way:  I merge those Chinese elements in little doses into my imagination and experiment with things.  So I guess it’s a personal thing, but I haven’t thought about it so much… it just happened. 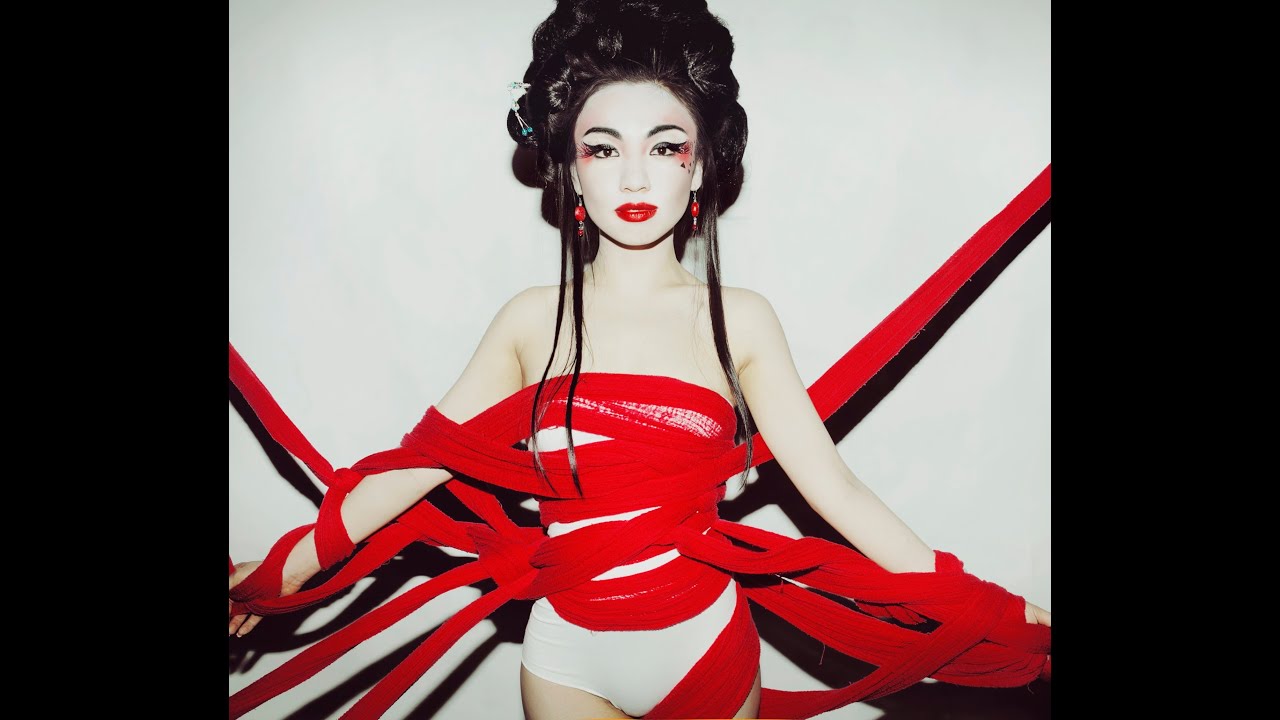 The music you make also has a very original and stunning sound.  Which artists/musicians have influenced you and were important as a child?

I was born into a Chinese music background with built-in Chinese Opera and Folk music programming.  Whatever I do now I can naturally blend in those elements to any degree.  So I play around with it.  Growing up, I definitely discovered myself liking dark, dreamy and deep music such as Pink Floyd, Cocteau Twins etc.

You were born in Beijing.  How does the music scene in China differ to that of the U.K.?

I have no idea.  When I left, I was close to the underground Rock scene there:  Some great, passionate (but struggling) musicians as opposed to Pop stars on the other end of the spectrum.  I’m not sure what happened after that.  When I go back now, performing there (I think) people accept uniqueness more.  The U.K. has a rich music culture (although it is saturated):  Fast-changing; it is still one the coolest place.  There’s certain moodiness about it that I like that makes me want to stay in and make music- more so than other places.

London (where Fifi is based) is a vibrant and busy music centre.  How important is the city with regards your creative process and success?

I’m ignorant of the world outside my studio.  I started off here- since my first production and song- and haven’t paid much attention to the changing world as music makes time go fast and make life linear and simple.  It would certainly be harder to focus on music if there was hot sun and beach outside my window.  I also like the freedom that I can be myself here: Straightforward, little judgement; it’s a great environment for me to create.

Congratulations on a great 2015.  Any particular highlights?  Do you think your best music is still ahead of you?

Yes, my last E.P. Violently Silently was definitely a highlight and the first time running a PledgeMusic campaign was thrilling and fun!  The launch show at The Garage was wicked.  The China tour was immense as well.  I have been making my best music in preparation for my next full-length album.  That would be the best so far:  However I need to prepare my audiences with this coming E.P. (Forbidden Desire) first, which is pretty close to what you will get from me.

When it comes to the coming year- in addition to the new E.P. – are there any other plans in mind?

I have a small tour in the U.K. and several good shows booked in E.U.  Mainly, I will be crafting the album just mentioned, and give it my all.

With regards the music you have already produced.  Which song has meant the most to you, either creatively or personally?

I taught myself to produce on my little Mac. many years ago.  I honestly didn’t know what I was doing or listening to, but Wrong was mostly done in the first year of my music mileage.   I’m pretty impressed thinking “How did I do that?”  by not knowing anything.  I loved Hurt Outta Sudden, I Need the World to End; Ever Rising Sun and Time.  The beauty I see mainly comes from non-thinking and pure innocence.  I’m also proud of Since When as I tried many (many) attempts at its production.  It is a track of very good balance:  Creativity and conventionality; technicality and experimentation.  There’s no shortcut or much luck when it comes to this track.  All of my tracks have their own stories:  I love all of them but once it’s released they belong to the world.  I no longer feel attached but I’m more-so (attached) to the ones I’m doing now.

You have studied at university and produce your own music.  Do you think it is important to have that control when it comes to your music, and how important have your studies been with regards your creative process?

I studied Economics and Sociology for my first degree and then Media Management as a Masters.  The little PhD I did was to do with music- but on the sociology side of things.

I don’t think I would be doing music if I didn’t start off producing music.  It’s absolutely critical and defining for me to have control of my sound.  I can’t imagine having other’s sound on my music.

Music is a basic instinct to me.  Everything seems written in my sub-consciousness already:  I just need to get it out.  Music theory is important with regards arrangement of course but I just taught myself:  It’s not rocket science, but I really wouldn’t want to study music at uni.  I would have died from frustration.  Nonetheless, my studies in business-related subjects were incredibly valuable:  That how I have managed to hold my own ground.

Are there any other musicians/acts out there you would recommend to people?

Sad-Sic- an artist I have collaborated with- has a unique sound.  When I said ‘unique’, I mean it… It’s hard to find these days!  He’s got a new album out and is keeping it low-key.  Still Parade- I came across last year- has amazing songs and sound.  They’re a German band:  Very inspiring.  Island is (a group) I found out about yesterday:  It’s not the first time I heard this kind of stuff but I really love the vibe.  Their drums are especially divine.

Your music mixes various genres and sounds- including Electronica and Pop.  Which artists were important with regards shaping your sound?

Like I said, my music comes from an unconscious, non-thinking place.  I don’t really think about it although people like to compare me with what they know of.  I love a massive range of music from all kinds of artists but my all-time favourite would be Cocteau Twins and D’Angelo- they are the only ones I can say I like almost all the stuff they did.

I love how unique your vocals, music and lyrics are.  Is there one particular element- lyrics, music or vocals- that are most important or is it the combination of the three?

Lyrics are most important to me as they happen from the effort of my mind.  Whilst my music and vocal delivery come from a place beyond my mind and thoughts; they are probably most unfamiliar to other people who are new to my cross-cultural style of singing in English- with a hint Chinese traditional tonality.

Finally, and for being such a good sport, you can name any song and I will play it here…

The new track I did as a gift to people:  Lost in Space Music