St. Paul and the Broken Bones

The single, Call Me is available from:

The album, Half The City is released by Single Lock Records, and available via:

These Alabama soul-revivalists proved a sensation when they played SXSW. With Janeway’s captivating and riotous belt (and a cornucopia of electricity on offer) at the fore, the seven-piece are on a mission: to overwhelm and awe.

St. Paul and the Broken Bones are, I am imagining, an act you may be unfamiliar with. Hailing from Birmingham, Alabama, it is perhaps invariable that they have been compared with their fellow Alabamians, Alabama Shakes. There is a similar forcefulness and sense of wonder between the acts, yet plenty of difference too. Alabama Shakes’ Brittany Howard is one of the most electrifying and formidable female voices in music; her tones turn the band’s motifs into something otherworldly and overwhelming. St. Paul’s lead, Paul Janeway, is a comparable force of nature; lacerating, tenderly and pugnaciously wrestling with the Birmingham outfit’s songs of love, lust and R ‘n’ B/Motown blends. Before I get into dissecting our intrepid crew, its members consist:

We do not hear many- if any- similar acts in the U.K., and I was delighted to come across St. Paul and the Broken Bones. The guys have been on the scene for a little while now, yet their Half The City L.P. is a fresh unveiling; it has inflamed and seduced U.S. critics, and reception and feedback has been hugely positive and effusive. Given the voice that Janeway offers up, tied together with his cohort’s energizing and wonderful sonic support, it is unsurprising that a certain sense of tumescent patronage has been paid. Critics have all been eager to lend their opinions and tributes, to a truly unique and ambitious band:

“…[singer Paul Janeway) didn’t knock it back even a notch, crooning and hollering, collapsing to ground like a white James Brown sans cape, dousing himself with water and exuding more mojo than I thought a man in a blazer and bow-tie was capable of.”

“Packed full of soul with that hint of Southern charm…”

With their album still ringing in the ears, American audiences have been keen to investigate the boys in the flesh; our heroes have an itinerant and jam-packed schedule in front of them; taking Half The City‘s multifarious gems as far and wide as possible. I have investigate the album in its entirety, and was amazed by the conviction and pace that runs through it. A sheer sense of exhilaration and passion runs through the entire L.P., and the amount of ground cover (across the twelve tracks) is startling. Tender romance and sweat-dripping passion rub shoulders, as do moments of introspection and reflection. When chosing a perfection representation of the album’s merit, I selected Call Me. It is a single which has been in the ether for a while, and a track that has been marked out as the album’s highlight. Recently Jo Whiley extolled the track’s virtues (on Twitter); introducing it to British audiences- and ensuring that the band gained new followers in the process. A lot of U.K. critics seem to be in self-exile in their neglect and naivety, because I have only seen one publication (here) surmise the group- I will mention them in the conclusion. With its video gaining plenty of YouTube love (a rarity considering it seems to be a natural home for trolls and back-biters); Call Me is the sound of a pioneering and purposeful seven-piece, with lofty ambitions of regency and longevity.

I have waxed lyrical about Birmingham’s finest soul revivalists, and their magic blend of music. As much as I adore native acts, it is always great to hear what our transatlantic cousins have up their sleeves. With the likes of Kongos in my thoughts, it is hardly surprising that another American act have burrowed their way into my soul. I was staggered by Janeway’s weaving and powerhouse voice; the band are a kinship of tight and wonderful sounds; myriad emotions and movements- surmounted and emphasised across their album. Reception for Half The City has been glowing indeed:

“Hailing from Alabama’s suddenly exemplary music scene, the horn-fueled Broken Bones don’t re-create one funky groove after another. They make them sound more like the truth than any band since the Seventies. That musicianship carries Janeway and crew far, songs including “Like a Mighty River” and “The Glow” evoking Redding and Al Green. Throughout, there’s a sense that the band lives to let it all hang out – beg, scream, and shout. Alabama Shakes’ Ben Tanner sat in the producer’s chair, while recording and mixing were done in Muscle Shoals. Half the City, bona fide all around“.

“With such a powerful debut, St Paul & the Broken Bones may struggle to live up to the hype they’re cooking. We can’t wait to see what’s to come from them in the future, but in the meantime we’ll take what they’ve got with a heartfelt hallelujah!“

“St. Paul and the Broken Bones’ music doesn’t just mimic the sounds its members love; it regenerates the tradition. This is what happens when players are unusually in tune with each other and with the discoveries they’re sharing. Half the City is the first major recorded statement from a band already growing into greatness. Get it now, while the sweat’s still fresh“.

“…That said, Paul’s voice (the real star in this band) pairs so perfectly with Allen Branstetter and Ben Griner’s understated but inignorable horn section that you pretty much have to be an asshole not to fall in love with this band inside of 3 songs. They’ve pretty much taken what the Alabama Shakes are trying to do and perfected it. Perfected. I did not misuse that word and it’s everything I envision Essential Listening to be“.

“Ultimately, Half the City is a captivating, exceptional soul album. In a day and age where authenticity is questioned, St. Paul and the Broken Bones smash any doubts. Half the City is not an innovative affair, but given its retro-tinge, it doesn’t need to be. By all means, the goal of keeping “soul” alive and flourishing is easily accomplished here“.

“There is a gospel feel to the music which is to be expected and two songs bring religion to the forefront. A loving couple following the lord and building a life together details “Let It Be So” while “It’s Midnight” is an emotional song about a mother pleading to her son to find god and all will be well. Both songs get into your head possessing the ability to make you think about your own life… There is not a single lull in the album and when it starts playing you will pray it never ends. SP&BB have captured the essence of their live shows in Half The City which is part of the charm. The emotion, the fine tuned soulful music, the Muscle Shoals flavor and influence of producer Ben Tanner (Alabama Shakes) is the rest of what makes it so damn good. This is the best record I have listened to this year and with ten months to go I find it hard that anyone will out do it“.

“They leave enough grit on his playing and the music overall to lend some real edge to the music. Like great soul and R&B albums of yesterday, you simply press play on Half The City and walk away. This album isn’t about a couple of songs standing out. It isn’t meant to be carved up on to mixes. Fire this up and let it take you a different place“.

There is no hyperbole or ingenuous proffering; it seems that the seven-piece have captured the attentions of the U.S. media. When it comes to U.K. reviews, there has been a sparisty- thus far. I can pay testament to just how great their album is, and it would be remiss to compare the group to Alabama Shakes. Our heroes have a different sound and set of songs; the fact that they share huge central voices and hail from Alabama is where the similarities end. When it comes to The Guardian (and its critic Paul Lester), I have often found myself in agreement. However, when he introduced St. Paul and the Broken Bands (as part of his ‘new band of the day’ feature), he missed the point entirely: “… They also sound mightily like other soul revivalists past and present, US and UK, from the Commitments to Fitz and the Tantrums. You will either be old enough to warmly appreciate their fidelity to the soul pioneers from Otis Redding onwards, be young enough not to care about history and adore their R&B (’60s variety) energy, or just dismiss them as karaoke copycats merely offering a Stars In Their Eyes version of the all-time greats“. He is entitled to his opinions, but, to me, they come across at the tired ramblings of a middle-aged curmudgeon. Aghast to truly cherish and augment any new act, Lester has forged a career from half-assed sentiments and praise: a sad reflection of a great sector of the media in general. That said, our heroes are playing dates in Dorset at the end of August; if anyone is able to get down and see them, I would strongly recommend it. Their live performances have been talked about in ecstatic whispers, and it offers the chance for fans to witness the songs in their barenaked and more electrifying form. My opening thesis concerned the U.K., and our lack of true diversity and bravery. Critics such as Lester are probably not helping when it comes to overturning and rectifying this trend, so it may take a bit of time to buck the negativity. My recent reviews have featured acts whom are ambitious and diverse, and offer up a semblance of the U.S.’s musical drive. It would great to think that the momentum can continue fervently, yet it seems that there is still a degree of stigma and reticence prescient. Our Alabama heroes are the kind of act that we should not only be fostering, but taking inspiration from. We do not have the landscape and evangelicalism over here, but that is not to say that it will be impossible to appropriate a similar sense of rousing Soul. A lot of our bands are still too reliant on the guitar-bass-drum configuration; few are willing to break these rigid structures and expand their horizons. With a paucity of acts and new artists setting the scene ablaze, it is always exciting to hear acts such as St. Paul and the Broken Bones. They may play the kind of music that is rare to your stereo; a genre that you may not necessarily seek out, but I would implore you to seek them out. Perhaps they don’t have the power to convert those infatuated with Metal or Punk, but realistically they will be able to draw in a whole host of diverse music-lovers. If you only investigate one of their tracks, I would recommend Call Me wholeheartedly. It is the encapsulation of a group that are setting tongues a-wagging; the sound of a septet with a unique voice- one that demands your attention. It is- where I am not- cloudy and somewhat dour; an injection of endorphins and sunshine is needed; a kick up the proverbial bottom. For all moods, needs and occasions, when it comes to uplifting music:

YOU will be hard-pressed to find a more impressive act.

Half The City Track Listing: 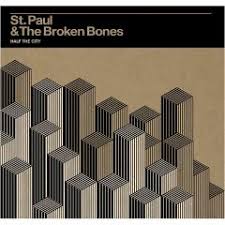 Let It Be So

For more videos of St. Paul and the Broken Bones: